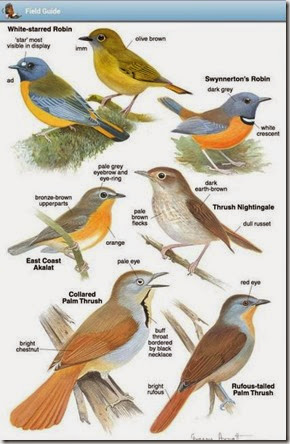 I purchased the “Roberts VII Multimedia Birds of Southern Africa” Android app last night. After I downloaded and installed the app on my phone (Sony  Xperia Z1 Compact, Android 4.4.4), the app then had to download the data pack (882Mb) and extract it.

However, I encountered problems once the app prompted me to choose where I wanted to extract it. There were two options: (1) Internal storage of the phone; and, (2) SD Card. I opted for (2) SD Card. Each time I selected it, the app would inform me that it could not locate the SD card. I tried this three times.

To satisfy myself, I used a file manager to actually browse to the SD card, just to make sure that it was accessible. It was!

Then, when I realized that the app simply couldn’t extract the data to the SD card, I relented and selected the phone’s internal storage. By this time I had tired out the app and it crashed without any fanfare. After this, the app would run, but it had no data files and so it was in effect unusable.

This was very annoying, and in my opinion, unacceptable! So, I wrote an email to the support of the app developer at support@gibbonmm.com this  morning. Being the time of the year that it is, I did not expect any response soon, so I decided to come up with a solution of my own.

When the app starts up and there are no data files, it asks whether to download the files or where the data had been extracted. This made me think! I know, it hurts sometimes! I realized that on my phone it created a folder named “sa_birding.” I also started wondering where it downloaded the data (.obb file) file to. I eventually discovered its location at /storage/emulated/0/Android/obb/za.co.sabirding. The file’s name is main.10.za.co.sabirding.obb. I used the Total Commander Android app to view the contents of the OBB file. From this I noticed that the original failed attempt by the Roberts app to extract the data, created the same file structure at /storage/emulated/0/sa_birding as that which I found inside the OBB file. So, once again I used Total Commander to extract the OBB file to /storage/emulated/0/sa_birding, and, voila!, the app came to life!

You are allowed to load the app and its data on 2 devices connected to your Google Play account, so in order to confirm the correctness of my solution, I went through the same steps on my Google Nexus 7 tablet, and it worked just fine there too.

So, since the app started working properly, I have been playing with it and enjoyed having fun with it, especially listening to the different calls and songs of the many different birds.

I suppose the final test of the worth of this app will be when I use it in the field where I encounter all kinds of birds.

After the failed extraction, I rated the app 2/5 on the Google Play store. I think it would be good to increase that rating now to at least 3/5. Once I’ve used it in the field, I could revisit the rating.

UPDATE:
23 December 2014 -I have now been using this app quite a lot, especially to identify birds. I think the app is well thought out and overall it is easy to use. It is definitely well worth having. One thing that may still have to be redesigned would be the "Identification" button on the first window. I find that somehow getting all the options right to identify a bird is somewhat cumbersome, and sometimes after I have selected all the options to identify a bird, the app comes back with zero hits. But, all nin all I think it is a great app, and I have re-rated the app and given it 4/5!
Posted by William Dicks at 22:06

I was very upset to find the app suddenly disappeared off my phone. when my soon managed to find it and re-install it appeared with smaller icons and NO bird lists. This is a disaster for my birding life.

Can anyone help please?