Back on 25 Oct 2014, Menlopark High School had a swimming competition with about 6 schools participating. My son’s school was one of the schools. It was a piping hot day. So, there I was with my camera, etc., ready to take some pics.

Created with flickr slideshow.
Posted by William Dicks at 23:16 No comments: 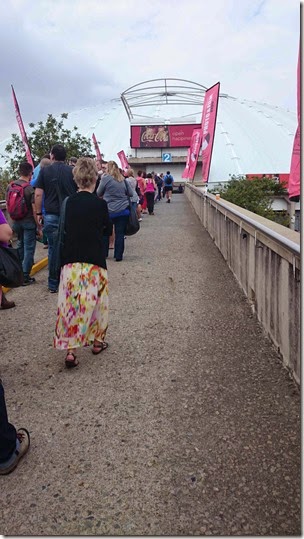 Still in line, but almost there

Once through the doors, it went fairly quick to get down on the expo floor. There were so many different products of all kinds on display, it was  hard to decide where to start. So, I started right where I entered the floor.

What really took so long to get in to the expo was caused by Samsung and their #DITCHtheDSLR campaign. The deal was that you could bring your fully working DSLR kit and dump it at the Samsung stall, and then receive a Samsung NX30. The terms stipulated the first 100 on the day, but it seems to me that the container they had there had many more DSLRs in it than just 100. I first thought, who would be nuts enough to do it, until I saw the old DSLRs that were dumped there. If I had old stuff like that, I probably would have done the same. It was a brilliant marketing campaign. 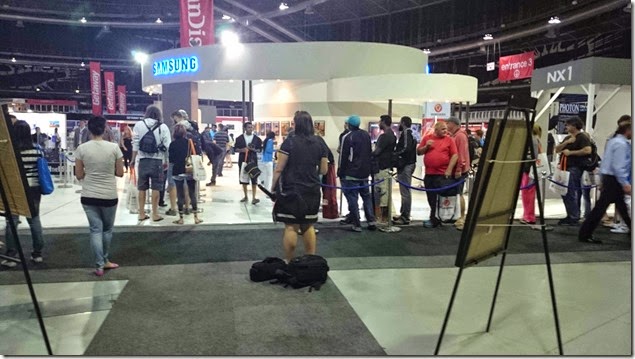 People in line waiting to ditch their DSLRs

I moved from stall to stall through the day. I attended one workshop, which really wasn’t a workshop, but more a demonstration of how fast external flashes could be used to freeze action in a fun way. People could volunteer to be shocked and then these pics would be taken of their responses. It was funny, and volunteers lined up for the experience.

Using my phone, I took these pics of 3 guys (shown on a big screen) being shocked

There were only 3 things I wanted to get at the expo, in reality. An 86mm variable ND filter, a monopod and a grey card. No-one there had an ND filter of that size, and I found no monopod I liked. I walked away with a grey card.

Oh yeah! You probably started reading this blog post because of the subject line!

Ok, I hated the expo, because their were just too many cool things, and I didn’t have the budget for any of it since I recently bought myself a Sigma DG 150-500mm 1:5-6.3 APO HSM lens for my Sony A37. That was expensive, and so the expo was just a field trip for me.

So, there you go! The expo was great and I will definitely return next year.

Posted by William Dicks at 22:17 No comments: