So, last week I read a bit at South African Birding Spots, and discovered that there is yet another nature reserve that I could go to and be there in about 30 minutes. That is the Roodeplaat Nature Reserve.

I visited Roodeplaat on Saturday morning, arriving there just after 06:00. It opens at 06:00 and I wanted to be there when it opened. It really took some time to eventually get in, even if I was only the eighth car. Once I got in I decided to stick to the tar roads for a while first, just to get to know the lay of the land.

While I was riding I saw a part of the Roodeplaat Dam and decided to follow a dirt road that seemed to go that way. After following the dirt road a while I decided to turn back to the tar road as the dirt road didn’t seem to go anywhere specific. I stayed on the tar road until I saw a bird hide to my right. I stopped the car and walked to the hide.

I sat at this hide for quite some time. I saw an African Wattled Lapwing at a distance. Slightly closer I saw some Grey Go-away birds.

After that I carried on with the tar road and eventually came to a T-Junction. Right led to the exit, and left took you further into the reserve. I turned left. I soon came to the reserve’s offices where I saw a sign that said, “Bird hide.” I decided to follow that, which led me onto another dirt track (with lots of stones and smaller rocks). After driving a while I came upon a split in the dirt road. A bunch of arrows pointed left and one pointed back. “Hmmm. Which one?” I went left, and after some time realized that there probably was no bird hide on that road. I turned around and returned to the split and carried on with the other side of the split. Not too long and I came across a beautiful kudu male. He tried to be very nonchalant, and even tried to hide behind some branches and leaves (see the slideshow below), but I spotted him and still got my photograph. 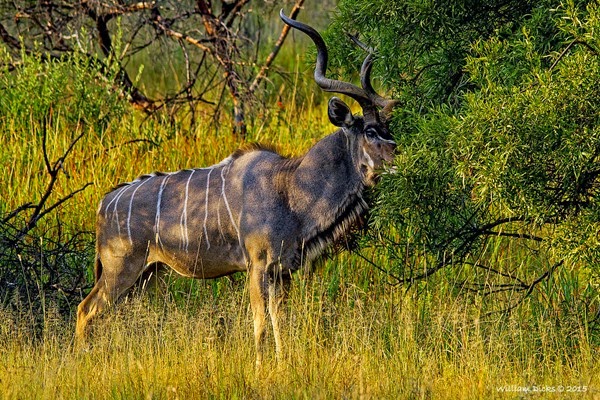 After the kudu I decided to continue; just to get to another split in the dirt road. I decided to just take the middle one. Eventually I got to the second bird hide. I sat here for some time too. I got to see 2 White-breasted Cormorants, a Squacco Heron and some swallows. I was hoping for so much more.

As I was walking back to my car, I saw that the tree on the other side of my car was covered in Barn Swallows. It was just amazing to see so many together. They eventually took off, and within minutes a couple of Lesser Striped Swallows came and sat in the same tree.

I wanted to stay longer and cover some more of the reserve. However, while I was driving down the dirt road I realised that my car’s fuel light was on and that my tank was low. Because I didn’t know the rest of the reserve, I decided to pack up and leave (to fill up) and to return another day.

I will return to the reserve soon, perhaps even this coming weekend. It is hard not to compare things with one another. Entering this reserve I had no idea where to go and which roads led to what. You are kind of left to your own devices. What I like about Rietvlei Nature Reserve is that they give visitors a map of the reserve so that you could at least have an idea where the different roads go. Roodeplaat had nothing like that. Also, getting through the gate wasn’t that easy. While we were still sitting in our cars waiting for the gate to open, one of the security team came around and we could enter our information in a log book. Once we got to the physical gate, it had to be done again, even though the first guy was there with the others. It could be that the slow entry was due to the day itself. Maybe the next time I go, it will go better. Next time I will take my own map that I get from Google Earth.

Created with flickr slideshow.
Posted by William Dicks at 21:14 No comments: